A memorial erected in 1948 by Ukrainians in the picturesque Cornish village of Mylor Bridge was yesterday granted Grade II listing by Historic England, and thereby protecting it for future generations.

A special commemorative ceremony was held by the memorial and was attended by the CEO of Historic England, Duncan Wilson, the Parliamentary Under Secretary of State at the Department for Digital, Culture, Media and Sport, Nigel Huddleston MP, Ukraine’s Deputy Ambassador to the UK, Taras Krykun, the Bishop of Truro, the Rt Rev Philip Mounstephen, Leader of Cornwall Council, Linda Taylor, local MP Cherilyn Mackrory, AUGB CEO, Fedir Kurlak, members of the local Parish Council, Women’s Institute, Mylor History Group, local residents and newly arrived Displaced Persons from Ukraine, some of who had travelled greater distances within Cornwall to be at the event.


The background
‍
In 1947 a group of 27 young Ukrainian men arrived late at night in Mylor Bridge, situated some five miles north of Falmouth. Their journey had taken them from a UN Displaced Persons Camp in Judenburg, Germany, disembarking in Hull, a stop-off for a number of weeks at Malvern in Worcestershire before moving on by train to Truro and then finally on to a military camp at Mylor.
‍
Five years earlier, these men had been uprooted from their homeland, aged 18-20, and transported in cattle-trucks to work as forced slave labourers in Nazi Germany and Austria.

One of those men, Mykola Andrusiw, recorded life at the Mylor camp. He recalled how during the group’s first week there, a committee was elected to “develop our cultural and national life and to show our history, traditions and culture” to the local British community.
‍
Before long, a 17-strong choir, a dance ensemble and a quartet had been formed and together with a soloist, musicians and a comedian, the committee set about in their spare time after daily work to prepare for and organise a host of successful performances in the local area (at which they simultaneously showed off artistic Ukrainian carvings, embroidery and ceramics that they also had the skills-sets to create!).
‍
Situated opposite the 10-barrack camp site were a number of large military coverings that had previously been used as warehouses. These were being considered for demolition until the committee intervened, requested and received permission to convert one of the constructions into a chapel.  As work on the project commenced, someone then proposed the placement of a memorial with an appropriate inscription to let by-passers know “who we are and why we are here”… On 7 June 1948, both the chapel and monument were blessed by three visiting Roman Catholic priests. The inscription on the memorial reads: “This symbol of faith in God was erected by Ukrainians who, escaping from Russian Communists, found refuge in England. 7th June 1948”.


Yearning for a free Ukraine
‍
As AUGB’s CEO noted in his address during yesterday’s commemorative event, the men who placed the memorial went on to become members and helped to develop the Association of Ukrainians. “They acquired community centres and churches to profess their Christian faith and promote their historical and spiritual cultural identity – always yearning to one day see a free and independent Ukraine”.
‍
Heritage Minister Nigel Huddleston underlined that this was “a memorial to providing refuge to those in need” and that it “symbolises the very close relationship between the UK and Ukraine and shows that we stand shoulder to shoulder with our Ukrainian friends in time of need”.
‍
Bishop Mounstephen especially welcomed all those who had recently arrived from Ukraine saying that “this cross today still stands as a sign of welcome and of hospitality” and that it “challenges us to go on welcoming those in need – not just those who are nearest and like us, but also those who are different and distant from us as well”.
‍
Ukraine’s Deputy Ambassador Taras Krykun said that the Ukrainians had “erected this monument as a sign and symbol of the path that they had travelled”. He recalled how the Soviets tried to erase the memory of Ukrainians and Ukraine’s fight for freedom.
‍
“During Soviet times, Ukraine suffered the horrors of the Gulag, deportations, mass executions, Holodomor, terror for everything and anything that was connected to Ukrainian Independence. Millions of Ukrainians were killed, tortured, deported and deprived of their homes.
“Today, tragically, we are witnessing a surreal repetition of history: war against a peaceful country, terror against innocent people. Russia continues to question the very existence of the Ukrainian nation.”
‍
Mr Krykun ended his speech by thanking the people of the United Kingdom for their unwavering support and expressed the hope that together “we will see our common goal of victory, prosperity and peace.”
‍
AUGB’s CEO thanked everyone who had contributed in granting the memorial protected status: “I know that those who placed the memorial would be very proud to see today’s event here. They would undoubtedly stand with tears in their eyes: Tears of joy that their memorial has received such recognition and tears of sadness at the unfolding circumstances in Ukraine”.
‍
The commemoration ended with Minister Huddleston and Deputy Ambassador Krykun jointly laying wreaths at the foot of the memorial on behalf of the UK and Ukraine.

Participants then transferred to Tremayne Hall where the Women’s Institute very kindly hosted tea and cakes which proved to be an excellent setting for everyone to continue discussions about events of 75 years ago and the present.
‍
It is only fitting to end this piece by repeating the call that rings out today in all corners of Ukraine: Glory to Ukraine, Glory to the Heroes [who are laying down their lives for Ukraine’s Freedom and Independence]! 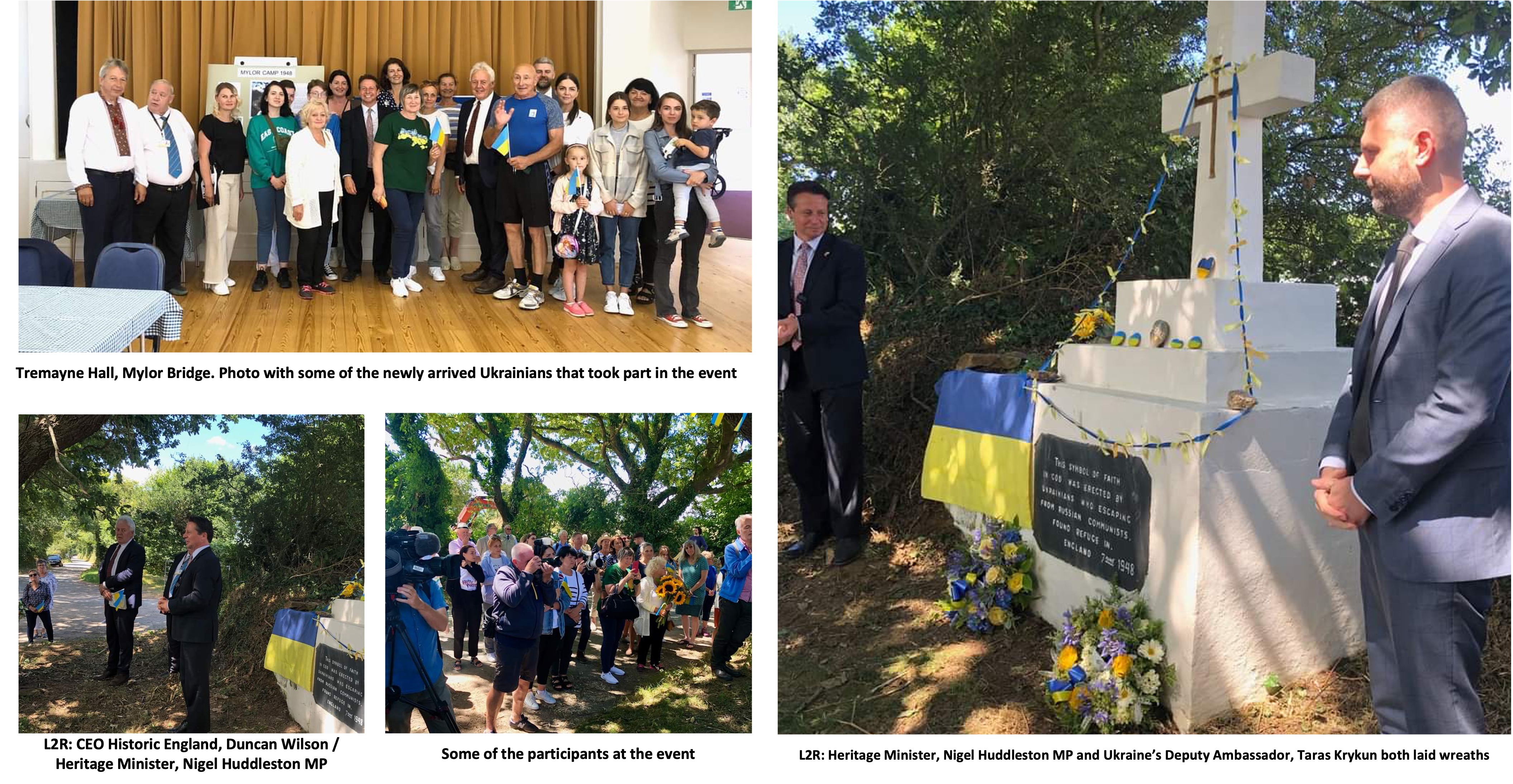